WASHINGTON, DISTRICT OF COLUMBIA, October 30, 2019 — As we saw yet again this week, one of the most powerful weapons in the War on Terror isn’t a secret, doesn’t involve high technology, and doesn’t cost millions of dollars. A highly trained and as-yet unidentified K-9 hero working with the Army’s elite Delta Force helped bring down ISIS leader Abū Bakr al-Baghdadi. Like his earlier Navy SEAL counterpart, Cairo, who helped bring down arch-nemesis Osama bin Laden, this four-legged hero’s contributions will likely save an unknown number of our warriors on the battlefield and our citizens here at home. 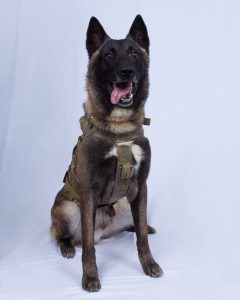 Warriors have been relying on these four-footed comrades-in-arms since the beginning of organized warfare. The Romans were known to have used dogs in their military campaigns to disrupt and overwhelm the enemy. During the Civil War, dogs were reported to have been used to guard soldiers. In the course of World War I, thousands of dogs were used as couriers. During the second World War, the Marines used dogs in the Pacific archipelago to locate enemy positions. And in Vietnam some 4,000 dogs were used to lead jungle patrols, saving many lives. More recently, some 2,500 military working dogs and contract working dogs worked side by side with our fighting men and women in Afghanistan and Iraq.

Today, military dogs are more important than ever in keeping our service men and women safe. With noses that are thousands of times more sensitive than humans’, giving them an unparalleled ability to sniff out and detect weapons caches and Improvised Explosive Devices, military working dogs have saved the lives of uncounted numbers of service members. When not keeping our warriors out of harm’s way, the dogs boost morale, providing our troops with companionship and an invaluable sense of home under almost unimaginable circumstances.

Clearly a war dog is a warrior’s best friend. We need to make sure that we, in turn, are theirs.

Which is not always the case. Even after American Humane, which has been working to support military animals for 100 years, worked with Congress to pass legislation in the 2016 National Defense Authorization Act requiring that retired military working dogs be returned to U.S. soil and offered first to their former handlers, logistics and funding too often conspire to keep them stuck on U.S. bases abroad. Nonprofits like American Humane are working not only to bring these stranded heroes home so they can enjoy retirement with their former battle buddies, but also to provide free medical care (which, surprisingly, they do not receive from the government) and give them a heroes’ welcome with recognitions such as our annual K-9 Medal of Courage on Capitol Hill.

Dogs like the remarkable K-9 hero now known around the world only by his image quietly serve on the front lines, keeping us and our troops safer in the War on Terror. They deserve not just our thanks, but our protection. It’s the very least we – and our country – can do in return for their loyal service.