WASHINGTON, DISTRICT OF COLUMBIA, February 19, 2021 — The national American Humane Rescue team has deployed at the request of local Tennessee authorities to participate in a dramatic rescue of more than 30 allegedly abused and neglected dogs who are dramatically malnourished and riddled with parasites. The past few weeks’ snow and subfreezing temperatures prompted authorities to seize the animals.

American Humane, the country’s first national humane organization, which has been conducting animal rescues for more than 100 years, is setting up a temporary emergency shelter where the dogs, who are emaciated from hunger and starved for basic human kindness, will be given food, medical treatment, and intensive 24-hour TLC. The rescue team will work with a local veterinarian, responders and contacts, performing intake assessments, and setting up a daily care routine as the case works through the legal process.

One beautiful dog who we are calling “Faith” is in critical condition, unable to hold food down with severe diarrhea, lethargy, and an extremely high white blood count. She is receiving intensive care with an IV fluid drip, powerful antibiotics and round-the-clock attention.

Six members of the American Humane Rescue team collectively traveled thousands of miles from as far away as California and Massachusetts to help the animals and will be bringing critical medicines and supplies donated by Zoetis Petcare (a U.S. business unit of Zoetis), which is the medical sponsor for American Humane Rescue.

“It is terrible to think any animal could be forced to live under these conditions, and we must put an end to such abuses,” said Dr. Robin Ganzert, president and CEO of American Humane. “Fortunately, our rescue team and dedicated local volunteers were able to help these animals, who will be rehabilitated and put on a path to a better life.”

The American Humane Rescue program was created in 1916 at the request of the U.S. Secretary of War to rescue war horses on the battlefields of World War I Europe.  Now celebrating more than a century of saving animals in need, the American Humane Rescue program has been aiding animals of every kind and has been involved in virtually every major disaster relief effort from Pearl Harbor to 9/11, the California wildfires, the Joplin, Missouri and Moore, Oklahoma tornadoes, the Japanese and Haitian earthquakes, and Hurricanes Katrina, Sandy, Harvey, Florence, Dorian, and Laura. During just the past two years American Humane Rescue teams have saved, sheltered, and fed more than a million animals. 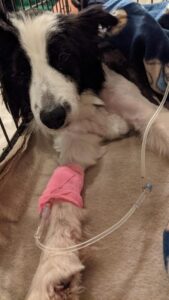