The August 2016 floods that swept through Louisiana caused massive devastation and affected thousands of residents—including four-legged locals. Two organizations, Dog People of Livingston and City of Walker Animal Control, jumped into action to help animals in need within mere hours of the heavy rainfall: The City of Walker Animal Control shelter began to flood, but with the help of Dog People of Livingston, they successfully evacuated the shelter and moved the animals under their care to safe ground. The two organizations, along with other local agencies, set up an emergency shelter for animals that had been stranded or left homeless in the flooding, and worked tirelessly during and after the floods to reconnect animals with their owners.

The Louisiana flooding stretched the limited resources of Dog People of Livingston and City of Walker Animal Control, and as thousands of animals remain abandoned by owners who evacuated during the floods and have not returned, both organizations recently found themselves in a financial predicament. To help both organizations continue the lifesaving work they exhibited during the August floods, American Humane awarded Dog People of Livingston a $13,000 grant, and City of Walker Animal Control with a $16,000 grant at an event in Walker, Louisiana today.

The two organizations plan to use the grant money from American Humane in different, yet equally critical ways.

Dog People of Livingston plans to host multiple free microchipping clinics, supply free collars and identification tags to pet owners, and lease digital billboard space on the highway to post pictures and information on pets lost in the parish. 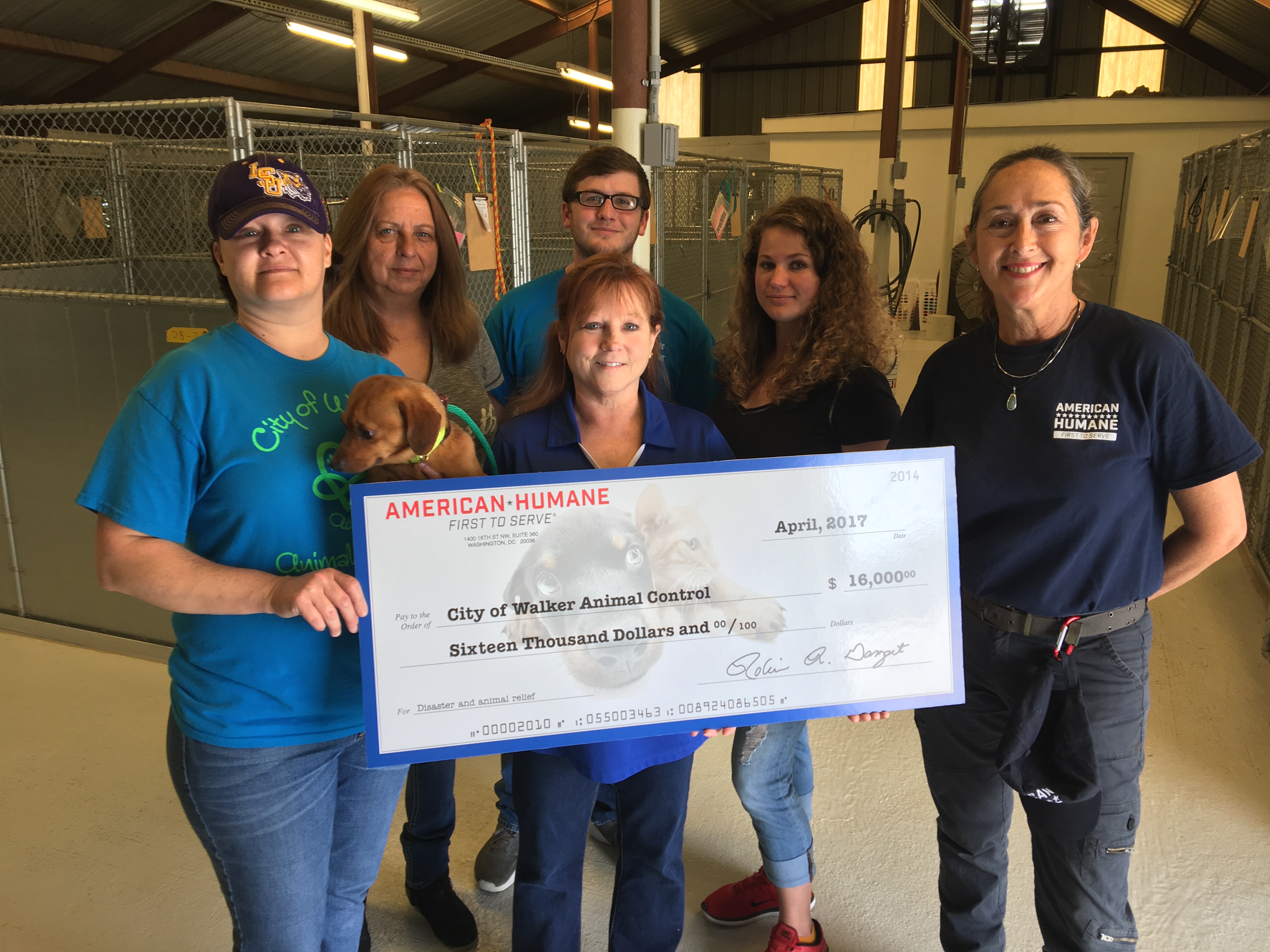 City of Walker Animal Control shelter suffered water damage from the floods and other damages related to animal overcapacity. They plan to use the grant money from American Humane to repair water-damaged walls and treat for mold, replace damaged A/C units, and acquire additional caging to house more displaced and lost pets in the area.

“Our Parish has an enormous lost pet issue. With this grant we will launch the ‘Lost… Found… Home.’ Project,” Lynell Johnson, Founder of Dog People of Livingston, said. “Providing completely free collars, microchips and ID tags, as well as access to widespread lost pet alerts, will ensure lost pets get back where they belong: home.”

“Thank you to American Humane, for not only helping us immediately after the Flood of 2016 with volunteers and supplies, but also with grant monies to help repair our building and replace resources that were damaged in the tragic event,” Mary Gray, Director of City of Walker Animal Control, said. “With their help, we are able to continue our endeavor of finding each animal a loving home to call their own!”