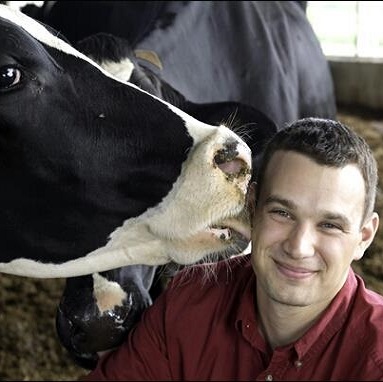 Dr. Kurt Vogel is an Assistant Professor and the Oscar Mayer Faculty Scholar of Livestock Welfare and Behavior at the University of Wisconsin – River Falls. Dr. Vogel’s research and teaching interests include the effects of management practices on the physiology and behavior of livestock from the farm to slaughter. He completed his B.S. and M.S. degrees in Animal Science at the University of Wisconsin – Madison. Vogel received his doctoral training in Animal Sciences at Colorado State University under the guidance of Dr. Temple Grandin. During this time, he performed multiple studies regarding the impact of feed additives on feedlot cattle physiology and behavior, electrical stunning of pigs, and dairy animal welfare assessments. Dr. Vogel also is the president of Vogel Livestock Solutions, a consulting company that focuses on practical and applied implementation of animal housing, handling, management, and slaughter processes that are based on a blend of science, ethics, and common sense. In his free time, Dr. Vogel writes a bimonthly featured commentary on meat industry – related animal welfare issues for National Provisioner magazine titled “Farm to Plate.”  He has been an invited speaker for numerous meetings and seminars and greatly enjoys working with livestock producers at the farm, ranch, plant, and feedlot to find practical, science-based solutions to animal welfare issues.