Home / Newsroom / The Washington Post | Hundreds of dogs serve in war. They deserve to retire with the soldiers who cared for them. 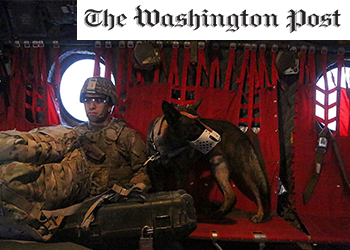 These animals are supposed to be offered to their handlers after their service, but that doesn’t always happen.

One hundred years ago, the guns fell silent in Europe. The Great War was over. Twenty million men lay dead, with twice that many wounded. Four of the world’s great empires were gone. The toll of the war allowed communism to gain a foothold in Russia. Its aftermath led to the rise of Nazism in Germany. The Spanish flu epidemic, spread by the conditions of the war and returning soldiers, killed at least 50 million more.

In addition to the unprecedented human cost of the war, animals — specifically horses — suffered like never before. Cavalry was a major part of war for centuries, yet the invention and widespread use of the machine gun by the start of World War I made men on horseback easy targets. Approximately 8 million horses were killed as a result.

It was against this backdrop of widespread equine slaughter that then-U. S. Secretary of War Newton D. Baker requested that American Humane, the country’s first humane organization, go to Europe to help treat and save wounded horses. Through basic veterinary practices and care, its volunteers were able to save the lives of countless horses, while — when necessary — spare others from long and agonizing suffering from their wounds.

While the animals used in war have changed over the past century, the need to support them has not. Today, canines are the most important animal in war. In contrast to horses, which were easy targets for the enemy’s weapon of choice, dogs are the perfect animal to help defend U.S. troops from the enemy’s most potent weapon today: the improvised explosive device. These hidden bombs are the “number-one threat,” said retired Adm. Mike Mullen, former chairman of the Joint Chiefs of Staff. IEDs have been responsible for roughly two-thirds of U.S. military casualties in Iraq and Afghanistan.

Dogs’ sense of smell is roughly 50 times better than that of humans, meaning they can sniff out IEDs before the bombs have an opportunity to do any damage. Acting alone, the military only locates about half of the IEDs planted in Afghanistan and Iraq. But with dogs, the detection rate increases to 80 percent. They are an invaluable asset for freedom of movement of our ground patrols, says the Defense Department.

Understandably, these military working dogs and their handlers develop a strong kinship on the battlefield. Inexplicably, reuniting them after their respective tours of duty is difficult.

Despite promises from the military that they would be reunited after their respective discharges, military working dogs have been adopted out without giving first choice to their former handlers. According to a Department of Defense Inspector General report released in the spring, of the 232 military working dogs who served in the tactical explosive device detection program from 2011 to 2014, only 40 were adopted by handlers. Nearly 50 were adopted out to civilians, 70 went to other Army units, at least nine died, and the rest went to law enforcement agencies. The IG faulted the Army for not having plans in place to discharge the dogs.

A New York Post investigation in 2016 found that at least 200 handlers lost their dogs when they were secretly adopted out to civilians by military contractors. As a result, hundreds of handlers have searched in vain for their dogs. These include Army veteran Andrew Spaulding, who tried and failed to reunite with his bomb detection dog Bono, with whom he served in Afghanistan. Army veteran Ryan Henderson even offered $5,000 cash plus a new German Shepherd to the North Carolina family who adopted his military working dog, Satan, to no avail.

Even after American Humane prompted Congress in the 2016 National Defense Authorization Act to require that military working dogs be offered to their former handlers first, financial and logistical hurdlesoften remain.

While military working dogs aren’t killed in action at the scale of their animal predecessors a century ago, they play just as important a role today by supporting our troops both on the battlefield and in the personal battles that can follow. They should be reunited after they are discharged, so they can enjoy retirement together.

Link to the original article »