WASHINGTON, DISTRICT OF COLUMBIA, July 6, 2021 — American Humane, the country’s first national humane organization, has released its annual Impact Report, detailing major accomplishments made over the past 12 months in furthering its 144-year-old work in ensuring the safety, welfare and well-being of animals, as well as promoting and nurturing the life-changing, life-saving bonds between animals and people. The report is available here.

In just the past year, American Humane programs directly touched the lives of some 1 billion animals around the globe – more than any other humane group of its kind – and continues to win top honors from leading charity watchdogs for effectiveness, efficiency and transparency. Among the major successes revealed in the report:

Wealth of Awards for Good Stewardship

American Humane has also earned much recognition for its good stewardship of funds and efficiency in turning charitable donations into effective action with 91.3 cents of every dollar spent during the past year going directly into life-changing, life-saving programs. American Humane was awarded Charity Navigator’s highest “4-Star” rating for the third time in a row (something achieved by only a tiny fraction of the 1.5 million charities in the United States), has been named a “Top-Rated Charity” with an “A” rating by CharityWatch, was called a “Best Charity” to support by Consumer Reports, and is among the fewer than one-tenth of one percent of U.S. charities to make the Better Business Bureau’s “Wise Giving Alliance” list.

“Since 1877, American Humane has been there for animals in their times of greatest need,” said Dr. Robin Ganzert, president and CEO of American Humane. “We were there following the Civil War when we were founded to fight for the humane treatment of all living creatures. We were there during World War I when we deployed to rescue some one million war horses wounded on the bloody battlefields of Europe. We were there during the Great Depression and countless other disasters over the past century . . . and we were there during the global COVID-19 pandemic to help the vulnerable among us. With the help of the public, our dedicated volunteers, and the support of our remarkably generous donors, we are proud to continue our legacy of providing caring, compassion and hope to more of those in need than ever before.” 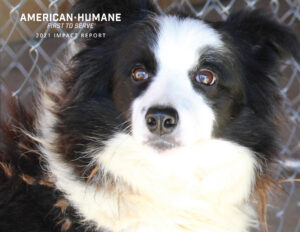 American Humane is the country’s first national humane organization. Founded in 1877, the nonprofit today saves, shelter, feeds and protects nearly one billion animals around the world each year. For more information, please visit www.americanhumane.org and please follow us on Facebook and Twitter.

June is #PTSDAwarenessMonth. Those diagnosed with PTS are 13x more likely to commit suicide, many of whom are veterans. Through our #Pups4Patriots program, we rescue dogs and train them to be service dogs for veterans with PTS and TBI. #ServiceDog #SuicidePrevention #Veterans

Congratulations to recent #Pups4Patriots graduates, Karen and her service dog Beau, and Raul and his service dog Sunny! Apply today for your own healing leash: https://bit.ly/2WSQ0fp.

#Animals enrich our lives and our planet, and with challenges facing species worldwide, humanity has a moral and ethical obligation to preserve these magnificent animals. Learn how you can celebrate National Zoo and Aquarium Month: https://bit.ly/3OfbdK5. #HumaneCertified