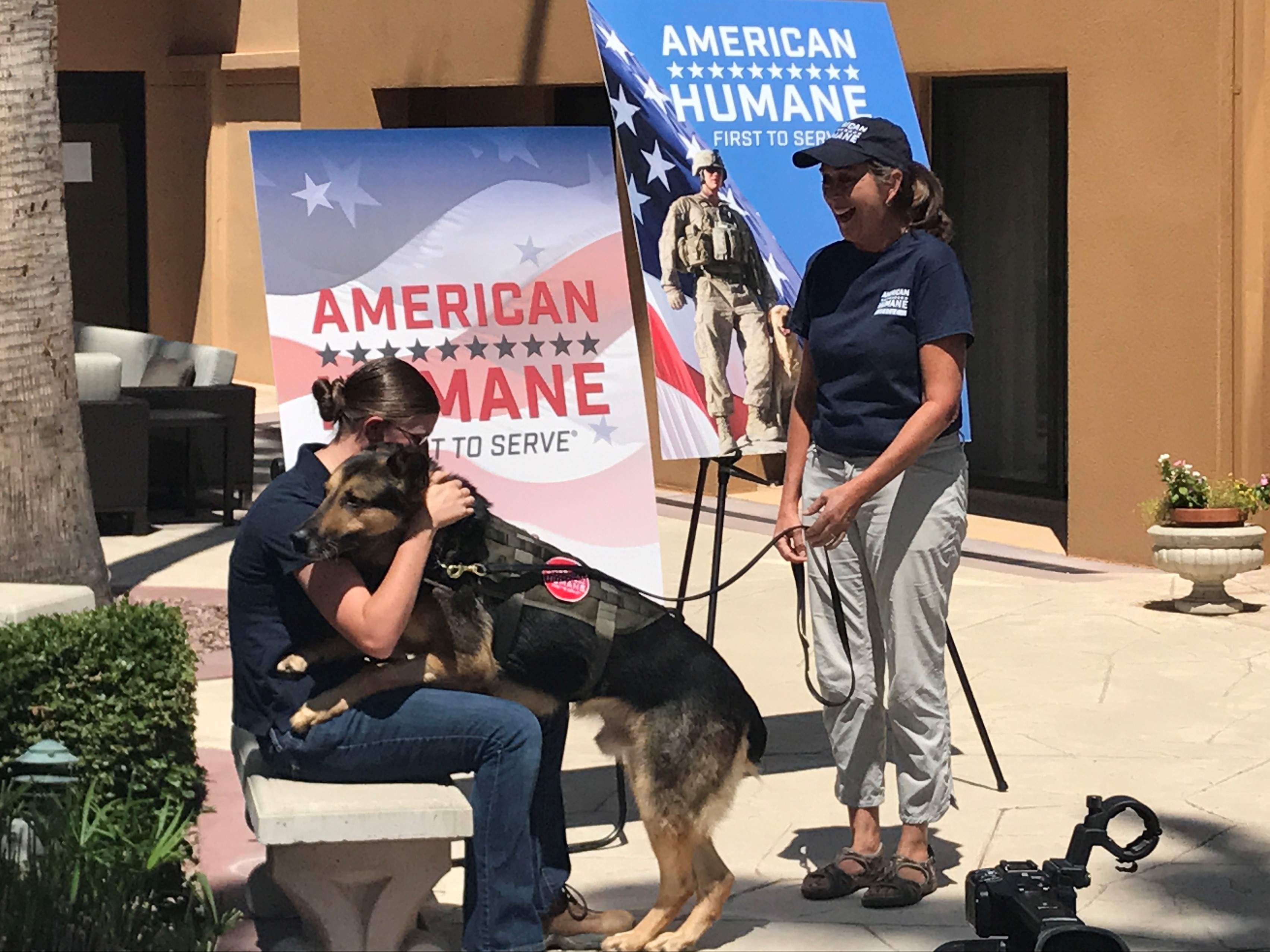 After being separated from his closest friend and battle buddy, Military Working Dog Rick, who bravely served for six years as an explosives detection dog protecting our troops in South Korea, was finally reunited with his handler U.S. Air Force Staff Sergeant Amanda Cubbage in an emotional reunion in Tucson near Davis-Monthan Air Force Base where SSgt Cubbage is now stationed.

The 7-year-old German Shepherd worked tirelessly to sniff out explosive devices in one of the most tense hotspots in the world, protecting the lives of U.S. soldiers. MWD Rick patrolled for bombs, VBIEDs (car bombs), performed security sweeps throughout the installation, searched the vehicles of important dignitaries, swept postal facilities, and swept the travel routes for EOD during bomb threats. SSgt Cubbage and MWD Rick did more than 30 explosives sweeps for distinguished visitors and military officials.

Helping Military Work Dog Rick—whose health has declined due to old age and years of demanding military duties—and other four-legged heroes retire on U.S. soil with their best friends is a top priority for American Humane, which joined with Hallmark Channel and Hormel Foods to bring Rick back from South Korea to the healthy, happy retirement he so richly deserves.

“Rick is my partner, friend, brother, and son,” said SSgt Cubbage. “I needed him more than anyone that isn’t a K9 handler would ever be able to understand. He was there for my happiest days in Korea and the saddest days that I ever had there. It broke my heart to leave him. Thank you for bringing my boy back.”

It is estimated that each military dog saves the lives of between 150 to 200 military service members.

American Humane, the country’s first national humane organization, has been working to support the U.S. military, veterans, and military animals for more than 100 years. One of their many efforts is working to bring retired military dogs back to the United States and reconnect them with the people who care most about them – their former handlers.

“I had many days in Korea that I needed emotional support due to family issues in the States,” said Cubbage. “He helped me through missing my husband’s military retirement, family members being diagnosed with several health issues, and the loss of a friend in the line of duty. He was my support.  He was there when my family couldn’t be.” They were so close, Cubbage even ended up taking photos with Rick as her date for the Air Force Ball (after sweeping it for bombs).

Despite the heroic service provided by America’s military dogs and the unbreakable bond between our two- and four-footed warriors, they don’t always end up with their battle buddies. Through its Lois Pope LIFE Center for Military Affairs, American Humane stepped in, and with the generous support of Hallmark Channel and Hormel Foods, sent one of its top veterinarians to South Korea’s Osan Air Base to pick up and escort MWD Rick back to the States.

“These heroes have served their country with valor, and saved the lives of our servicemen and women while risking their own,” said Dr. Robin Ganzert, president and CEO of American Humane. “It is essential that now we step up and do the right thing for these warriors so they can benefit from the remarkable bond that safeguards and connects them, not only in war, but in peace.”

“The relationship between a military working dog and its handler is as deep as the human-canine bond goes; they are inseparable in war and it’s only right that they be allowed to stay together on the other side of the battlefield,” said Bill Abbott, president and CEO, Crown Media Family Networks. “As part of Crown Media’s corporate pet initiative dedicated to emptying our nations’ shelters and celebrating the joy pets bring to our lives, we are incredibly honored to support American Humane’s efforts to ensure that these heroic partners, like Amanda and Rick, are reunited forever here at home.”

“Hormel Foods is inspired by those who serve and have served our country. This commitment is part of our history and who we are today,” said Jim Sheehan, chief financial officer and chairman of Hormel Foods veterans’ employee resource group. “We couldn’t be more proud to be part of this special day, and to support American Humane’s efforts to reunite service men and women and the animals that served our country. We thank Staff Sergeant Amanda Cubbage and her loyal companion Rick for their service – they have truly inspired us.”

“I couldn’t have been any happier than the day I got the email that I could bring him home forever,” said Cubbage. “I can’t wait to pick up where we left off.  He was my buddy and I missed him each and every day.  There is just something about having your partner finally home with you that can’t be explained. He deserves the life of ease and luxury that I will give him.  He is a part of my heart that I will be able to get back.  I need him as much as he needs me.”

About Hormel Foods – Inspired People. Inspired Food.™ Hormel Foods Corporation, based in Austin, Minn., is a global branded food company with over $9 billion in annual revenue across 75 countries worldwide. Its brands include SKIPPY®, SPAM®, Hormel® Natural Choice®, Applegate®, Justin’s®, Wholly Guacamole®, Hormel® Black Label® and more than 30 other beloved brands. The company is a member of the S&P 500 Index and the S&P 500 Dividend Aristocrats, was named one of “The 100 Best Corporate Citizens” by Corporate Responsibility Magazine for the ninth year in a row, and has received numerous other awards and accolades for its corporate responsibility and community service efforts. In 2016, the company celebrated its 125th anniversary and announced its new vision for the future – Inspired People. Inspired Food.™ – focusing on its legacy of innovation. For more information, visit www.hormelfoods.com and http://2015csr.hormelfoods.com/.

The U.S. House of Representatives just passed the PAWS for Veterans Therapy Act, which will fund service dogs for #veterans diagnosed with Post-traumatic Stress. We are overjoyed by the broad support in #Congress for the healing power of the human-animal bond! #PawsAct

Last week, we had the honor of facilitating the reunion of retired MWD Xxanthe with her former handler, U.S. Air Force Staff Sergeant Wade Alfson. The heartfelt #reunion was a wonder to behold. Read the full story: https://bit.ly/3bkaAxf #BattleBuddies #MilitaryAppreciationMonth

Every day, 184 veterans are diagnosed with Post-Traumatic Stress.
Our #Pups4Patriots program harnesses the healing powers of the human-animal bond to make a difference for veterans in need. Want to help? Register for our virtual Pups4Patriots 5K! https://www.americanhumane.org/P4P5K #P4P5K