“We at American Humane honor the lifesaving contributions of all veterans, including the four-legged military dogs who risk their lives to courageously serve our country,” said Dr. Robin Ganzert, president and CEO of American Humane. “We are thrilled Akim will get the retirement he deserves, alongside the person who loves him most.”

Uniquely qualified in detection and patrol, Akim was paired with SrA Jenna in 2020. The two served together in South Korea, patrolling the Air Base, searching vehicles at the gates, and training with the Republic of Korea Air Force Special Forces. In November 2021, they were forced to part ways.

While serving together, Akim had a near-death experience after accidentally swallowing a bee and suffering from an extreme allergic reaction. SrA Jenna leaped into action as Akim went into anaphylactic shock, picking up the 70-pound dog and running him to the veterinarian at the base. Thanks to her quick action, Akim survived. SrA Jenna spent the next two days by his side and even slept with him in his kennel to keep him company. From that day forward, SrA Jenna always had an EpiPen on hand.

Tragically, Akim lost his eyesight when he was resuscitated and in recovery. He eventually regained some of his sight and was able to perform his duties on base again, but it never returned fully. This unfortunate incident formed a lifelong, unbreakable bond between Akim and SrA Jenna, and the pair have been inseparable ever since.

“I don’t care about me. I care about my dog. I just wanted to make sure that he was as comfortable as he could possibly be,” said SrA Jenna, recalling the traumatic event. “No one is going to care as much about him as me.”

From the moment she became MWD Akim’s handler, SrA Jenna knew she wanted to be the one who gave him a forever-loving home when he finished his years of service. American Humane was honored to work with SrA Jenna and the U.S. Military to transport MWD Akim more than 6,000 miles from South Korea to New Mexico, into SrA Jenna’s loving arms. The reunion took place in Albuquerque.

“I want him to see everything,” said SrA Jenna. “I want him to experience the freedom of life. I want him to go in a river and go swimming and just live his best free life. He still deserves to see the world and get to have some fun.”

Retired MWDs often have medical issues stemming from their physical jobs, and American Humane provides free specialty and preventative medical care to make retired MWDs as healthy and comfortable as possible during retirement.

To help us reunite military heroes like Akim with their former handlers and give them the retirement they truly deserve, visit www.AmericanHumane.org. 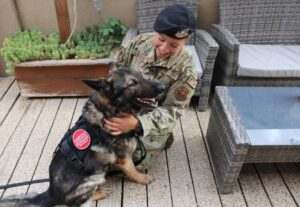