“We are thrilled to have Alison as an ambassador for American Humane and our spokesperson for the virtual Pups4Patriots 5K,” said Dr. Robin Ganzert, president and CEO of American Humane. “This virtual event will serve as a rallying point to bring us together to provide veterans in need with the healing power of the human-animal bond. With Alison by our side, I am confident we can raise enough funds to train more service dogs – helping veterans struggling with the invisible wounds of war.”

American Humane’s national Pups4Patriots 5K is a virtual weekend-long event, raising funds to train lifesaving service dogs for veterans coping with Post-Traumatic Stress and Traumatic Brain Injury. Patriotic participants can show their solidarity with America’s veterans by walking, jogging or running at their leisure over the Fourth of July weekend. Participants can register online.

Research shows that specially trained PTS service dogs can reduce stress and anxiety levels, mitigate depression, ease social reintegration, provide comfort and restore confidence to affected veterans. There are many obstacles standing in the way of veterans in need of service dogs, however, including long waiting lists and exorbitant costs, often upwards of $30,000 per service dog. American Humane’s Pups4Patriots™ program pairs dogs in search of forever homes with veterans in need. The two are trained together at no cost to the veteran.

“I am honored to stand with American Humane and bring attention to the critical need of service dogs,” said Alison Sweeney. “I ask that you join me and participate in the Pups4Patriots 5K, making a difference for those who have served and sacrificed for our freedom.”

American Humane is a top-rated charity that has been supporting the U.S. military, military families and military animals for more than 100 years. In addition to the nearly one billion animals it saves, shelters, feeds and protects around the world each year, American Humane brings home retired working dogs and reunites them with their handlers, trains lifesaving service dogs for veterans with PTS and TBI and helps provide critical healthcare to our K-9 warriors. 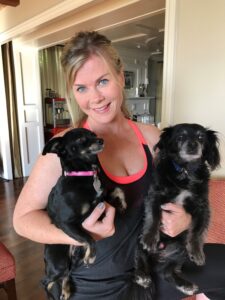 American Humane is the country’s first national humane organization. Founded in 1877, American Humane is committed to ensuring the safety, welfare and well-being of animals, and our leadership programs are first to serve in promoting and nurturing the bonds between animals and people. For more information or to support our work, please visit www.americanhumane.org and follow us on Facebook, Twitter and Instagram. With more than 91 cents of every dollar spent going directly to programs, American Humane has earned Charity Navigator’s highest “Four-Star Rating” three times in a row, has been named a “Top-Rated Charity” with an “A” rating by both the American Institute of Philanthropy’s CharityWatch and Great Nonprofits, and was awarded the gold level seal from GuideStar USA. The organization has also earned the Independent Charities Seal of Excellence, was awarded inclusion on Better Business Bureau’s prestigious Wise Giving Alliance Accredited Charities list and was designated as a “Best Charity” by Consumer Reports.