Yesterday, Military Working Dog Irk – a 9-year-old German Shepherd – finally came home, straight into the loving arms of his former handler and best friend, Staff Sergeant Sheridyn Rupp. The two had not seen each other in a year, and the heartwarming reunion took place in sunny Phoenix, Arizona at the headquarters of Lulu’s Fund, which is part of the Timothy T. Day Foundation.

MWD Irk is trained as a Patrol Narcotics Detection Dog. He served his time at Scott Air Force Base in Illinois for more than six years, helping to train his handlers on the basics and tactics of working with a Military Working Dog. MWD Irk worked alongside SSgt Sheridyn at Scott AFB for 22 months – the longest handler he ever had. While assigned as a team, the two conducted daily trainings on obedience, bite-work, narcotic detection and base security measures. However, SSgt Sheridyn and MWD Irk were more than just working partners, they were best friends. 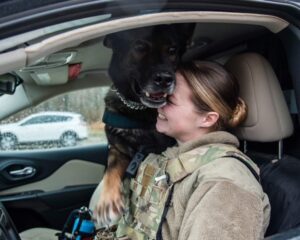 SSgt Sheridyn said that MWD Irk was one of the sweetest K-9’s she had ever met. They came to depend on one another, and when they had to go their separate ways, it was heartbreaking. She now serves in the Reserves at Luke Air Force Base in Arizona. 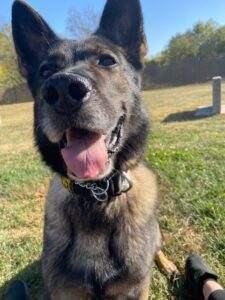 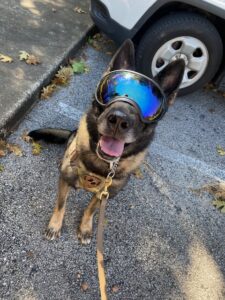 At American Humane, we honor the lifesaving contributions of all veterans, including the four-legged military dogs who risk their lives while courageously serving our country. We are committed to reuniting these retired military hero dogs with their former handlers, who cared for and served alongside them.

Because of his age, MWD Irk had begun to slow down, and the decision was recently made to give him a loving home and a couch to lay on for his retirement. SSgt Sheridyn reached out to American Humane for help, and we were honored to bring MWD Irk to Phoenix to facilitate this wonderful reunion and give this brave K-9 the retirement he deserves alongside his favorite person in the world.

The joy and relief shining on both of their faces when they finally saw each other again reminds us why our military reunification program is so important. MWD Irk is finally home. 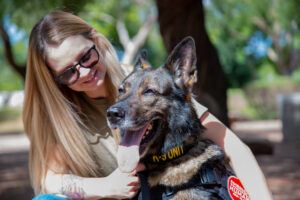 With your support, we can reunite more military heroes like Irk with their former handlers and provide free specialty and preventative medical care to make their retirements as comfortable as possible. If you are able, make a gift here.

For Miguel, a @USMC #veteran, training with his #ServiceDog Arya meant learning how to communicate nonverbally, using body language to show Arya when he needs help. According to Miguel, “Arya’s like my new medication... She’s there when I need her – 24/7.” #Pups4Patriots

They need you. This #HolidaySeason, give the give of #love and #rescue an animal in need of a home.

“American Humane in Action” is a five-part series providing a firsthand look at how our groundbreaking programs affect change in the real world, from animals rescued from perilous disasters to endangered species on the brink of extinction. Watch it now! https://bit.ly/3EkVnbK