A friend of American Humane was running errands in Pahokee, Florida when he witnessed a tragic accident – two kittens run over by a truck. These two kittens were Leo and his littermate, who had been abandoned with their mother in a parking lot. American Humane was contacted and Leo was rushed to an emergency vet clinic in West Palm Beach. Sadly, Leo’s littermate did not survive the incident.

Leo, just eight weeks old, was facing a long journey of recovery. He had a left-sided tibiotarsal fracture-luxation, which is essentially a fractured ankle, and had lost part of his tail. He was also infested with fleas and hookworms. Fortunately, the surgeon did not recommend surgery, but instead lots of love and personalized care.

Leo was taken to the American Humane Sanctuary, a transformational rescue retreat where those that are broken in spirit can find hope and a second chance at life. At the Sanctuary, Leo received around-the-clock care and was able to heal. Despite the rough start to his young life, he has grown into a rambunctious, happy and healthy five-month-old kitten. 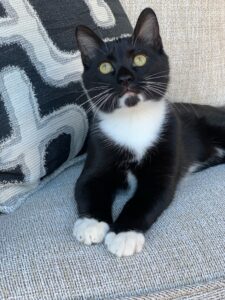 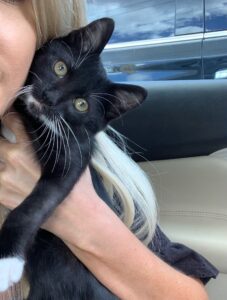 Affectionately known as “Lucky Leo,” his injuries haven’t slowed him down at all! As his name implies, Leo has the heart of a lion and is a true survivor. He loves to play ball and is an opinionated boy who will always tell you what’s on his mind. He’ll also curl up in your lap for cuddles and purrs. A spunky, curious kitten with lots of love to give, Leo was finally ready for a home to call his own.

We are thrilled that Leo’s luck continued, and he found his own purrrfect forever family just in time for the holidays! Leo will be doted upon and loved for the rest of his days. 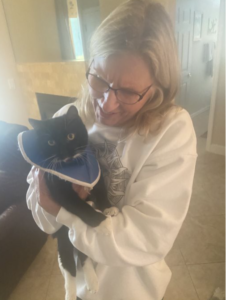 Lucky Leo was the first animal to be adopted from the American Humane Sanctuary, and his story represents our mission for the Sanctuary – to be a refuge of hope and healing for all.

Diana, a U.S. Air Force veteran and a graduate of our #Pups4Patriots program, recently got married! And who was by her side during the ceremony? Her sweet service dog, Sam! What a beautiful family, congratulations! #ServiceDogMonth

Alphie, who was awarded the American Humane Medal of Courage in 2017, has crossed the rainbow bridge. Alphie deployed twice to Afghanistan before becoming a @TSA explosives detection K-9. Thank you for your service, Alphie. You will always be remembered. @TSA_Southeast

The truth of the matter is that in these tough economic times, pet owners are struggling to make ends meet and many can no longer afford to care for their furry best friends like they once could. Read @RobinGanzert's recent op-ed in @FoxNews to learn more:

Inflation is hitting America's 90 million pet owners hard and they need help, too