On the evening of Friday, November 12, a constellation of human and animal stars assembled for the 2021 American Humane Hero Dog Awards® gala at the glamorous Eau Palm Beach Resort in Palm Beach, Florida, to celebrate our nation’s most courageous canines.

It all came down to this moment. After nearly a year, more than 400 nominations, one million votes by the animal-loving public and a national television broadcast, seven courageous canines united from across the nation to find out who would be crowned this year’s American Hero Dog – the highest honor in all the canine world.

More than 400 guests dined decadently in the elegant Eau Palm Beach Resort ballroom as each Hero Dog’s story was shared, revealing their love, compassion and courage. Then, the moment we were all waiting for… Boone was named this year’s most heroic canine!

Boone survived heartbreaking cruelty as a puppy. His hind legs were brutally and intentionally removed by his former owner when he was only 6 weeks old. However, he didn’t let this tragedy define his life.

Everything changed for Boone when he was adopted by Tanya Diable and fitted for a wheelchair to improve his mobility. He has been a dog on a mission ever since, always smiling and spreading his infectious joy to those around him. Boone’s sweet nature and enthusiasm for life never quit, and his story of resilience made him a perfect fit for his new profession as a therapy dog. Boone currently lives in Butler, Pennsylvania, and inspires those around him every day to overcome the obstacles life throws in their path. 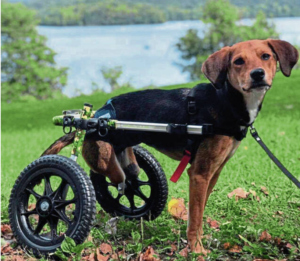 Boone is an ambassador for the nonprofit, Joey’s P.A.W. (Prosthetics and Wheels). To date, the charity has provided mobility devices to more than 700 dogs in need. Boone and Joey’s P.A.W. hope to improve the outcome for dogs with mobility issues in shelters and rescues across the country, while also improving perceptions about their adoptability.

We are so proud of Boone, the 2021 American Hero Dog! Hear his story.

Cole may be deaf, but he is helping people hear his message: a disability is not an inability, it’s a superpower! Read more about Cole, the 2022 Therapy Hero Dog: https://bit.ly/3wfVkvT. #HeroDogAwards @ColeDeaf