Monster Hurricane Ida was disastrous for humans, but for the local animals it was just as terrifying and tragic. Many innocent animals were separated from their beloved families – leaving them panicked and alone in the middle of a raging storm. In response, the American Humane rescue team deployed to Louisiana to manage an overflow temporary animal shelter for the displaced pets.

Both Terrebonne and Lafourche Parishes in southern Louisiana suffered catastrophic damage during the hurricane. An estimated 40 percent of houses were left uninhabitable in the area, and many of those that still did have homes were left without water and electricity for a considerable time afterward. The residents of the area are resilient, however, and we were struck by their kindness and happy spirits during this tough time of recovery. 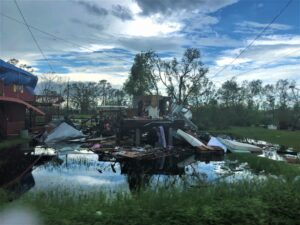 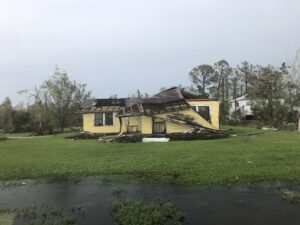 Our Rescue team spent four weeks running the temporary shelter with the assistance of Terrebonne Parish Animal Shelter, Lafourche Parish Animal Shelter and other national partners. More than 100 animals were safely housed and cared for at the shelter by our first responders. A few of the animals were lucky enough to be reunited with their loving families, while others were transferred to shelters and rescues to find their own forever homes.

Providing care for stranded, injured and lost animals in the wake of a natural disaster requires around-the-clock attention to the physical and mental wellbeing of each individual animal. First responders spent most of the day positively interacting with them – whether it be walks, play time or snuggles. While many of the displaced pets arrived at the shelter scared and confused, with terror shining in their eyes, the healing power of the human-animal bond took effect and they slowly learned to trust us. Many had endured trauma, but all it took was a little love to make them feel at home. 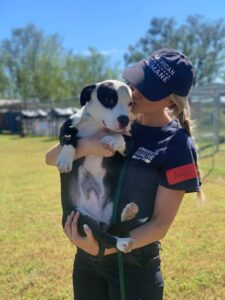 Whenever disasters strike, the American Humane Rescue team leaps into action. We carefully monitor developing situations before deploying resources, including highly trained staff, volunteers, food and medical supplies, in the most effective and efficient manner possible.

Our Hurricane Ida disaster relief efforts wouldn’t have been possible without the support of our donors, as well as our amazing, dedicated volunteers. On behalf of American Humane and the hundreds of animals we made a difference for, we thank you.

For Miguel, a @USMC #veteran, training with his #ServiceDog Arya meant learning how to communicate nonverbally, using body language to show Arya when he needs help. According to Miguel, “Arya’s like my new medication... She’s there when I need her – 24/7.” #Pups4Patriots

They need you. This #HolidaySeason, give the give of #love and #rescue an animal in need of a home.

“American Humane in Action” is a five-part series providing a firsthand look at how our groundbreaking programs affect change in the real world, from animals rescued from perilous disasters to endangered species on the brink of extinction. Watch it now! https://bit.ly/3EkVnbK