MSG Jose said, “During my battle with panic attacks, anxiety, depression, and my abuse of alcohol, Dum Dum was always there for me. He would lay in bed with me, comfort me and make eye contact with me as I struggled with my internal wounds. Having him there with me was a source of relief because he knew my struggles, my pain, and would listen…”

American Humane recognizes the important role that animals can play in the lives of our nation’s veterans. That’s why our Pups4PatriotsTM program finds dogs in need of forever homes, including those from shelters, and trains them to become lifesaving service animals for veterans diagnosed with either post-traumatic stress (PTS) or traumatic brain injury (TBI). All at no cost to the veteran.

Through this program, we were able to work with MSG Jose and pair him with a service dog, Starr. In January, they graduated together from training. When MSG Jose first met Starr, he knew the pairing would work out, describing it “like Gump and Jenny, spaghetti and meatballs, peanut butter and jelly. It was meant to be!”

When MSG Jose named Starr, he picked the name for a special reason. When going through the training process with Starr he recalled his worst day in Iraq, when his vehicle was struck by an improvised explosive device. On that day, a medic told MSG Jose that he should thank his “lucky stars.”

MSG Jose explained, “After my evaluation, I headed back to my quarters only to look up in the sky, a sky of a moonless night but only a few stars, but one star stood out to me that night. It was a bright star that gave me light as if the moon was present guiding me back to my quarters for the night. Waking up that morning, Starr’s name was given.”

At American Humane, we are so excited for the life that MSG Jose and Starr will build together. In MSG Jose’s own words, thanks to his bond with Starr, he has “been able to attend more outside activities where large crowds are present. Just being that person that I used to be makes me happy. I’m not saying my internal wounds are gone, what I am saying is that Starr has started a new chapter in my life. A chapter that I never knew would ever exist. Our bond is only going to get stronger and deeper.” 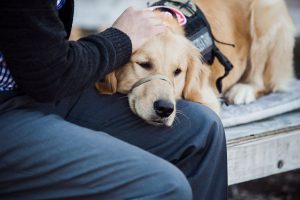 At American Humane, we salute MSG Jose and his service to our country. Through our Pups4PatriotsTM program, we are devoted to harnessing the healing powers of the people-animal bond and improving lives on both ends of the leash.